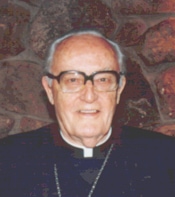 The Most Rev Lancelot Goody

Fifty years after the foundation of the Anglican Diocese of Bunbury a Catholic Diocese, centred on the same town, came into existence in 1954 and on 12th November of that year Bishop Launcelot John Goody, DD, D.Ph., was appointed the first Bishop of the new Diocese.

He was born in the home of his parents Ernest John and Agnes Goody (nee Buckeridge) at 9 Bury Street, Edmonton, North London on 5th June 1908 and baptised soon after in St Michael’s Church of England in the same district. When the effects of creeping spinal paralysis began to be felt, Ernest Goody was advised by his brother-in-law in Perth WA to join him there. Consequently, Dr Goody, his parents and sister left for Australia via Cape Town aboard the “Orontes” on 2nd June 1916.

Having written to Archbishop Clune of Perth before leaving England, the family were met soon after arrival by his representative, Rev. Lawrence Pace who later received all into the church. Having expressed a desire to study for the priesthood, Launcelot Goody was sent to Rome for study in September 1924 and was ordained to the priesthood there on December 20, 1930.
Fr Goody was ordained a Bishop in 1951 and spent 14 years as Bishop of Bunbury before being appointed Archbishop of Perth in 1968.