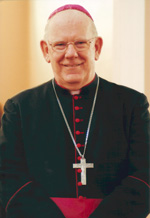 Most Reverend Gerard Holohan was born and baptised on the 5th September 1947. He was educated by the Sisters of Mercy at Our Lady Help of Christians Primary School and the Christian Brothers, first at St Francis Xavier College and then at Trinity College.

He entered St Charles Seminary Guildford in 1965 for his philosophical studies, and St Francis Xavier Seminary, Adelaide in 1968 to study theology. He was Ordained to the Priesthood on 4th September 1971. Initially appointed to Cottesloe parish, he then served in the parish of Subiaco where he remained until 1975.

In 1974, Archbishop Goody asked him to spend his ministry in Catholic Education. Between 1975 and 1981, he completed postgraduate degrees in Education and Arts at Murdoch University in Perth, and Fordham University in the United States. In 1980, he was appointed chaplain and Religious Education Coordinator at Newman College, Churchlands.

In 1981, he was appointed Director of Religious Education, a position that led him to serve eventually in that role in the dioceses of Perth, Geraldton, Bunbury and Broome. From then, his interest and responsibilities extended to all levels of education, including tertiary education.

Bishop Gerard has served on both state and national education bodies, including the Catholic Education Commission and the Catholic Institute Council of Western Australia. He is a former Governor of the University of Notre Dame Australia.

In 1991, he was appointed Episcopal Vicar for Faith Education, which included responsibilities for adult education, people with disabilities and the religious education of Catholic children not in Catholic schools.

Though focused mainly on education, his 47+ years of ministry has led to broad experiences across many other aspects of Church activity. Apart from parishes in Perth and New York in the United States, various other appointments have led to pastoral experiences, ranging from young people, including homeless youth, to people with disabilities, the elderly, and to the Church’s ministry to Aboriginal people. He became an Affiliated Member of the Marist Brothers Order in 1990.