What was undoubtedly the culmination of a great endeavour in Church work was witnessed last Sunday by the people of the antique and pretty seaside town of Bunbury, when his Grace Archbishop Clune blessed and opened the beautiful and commodious church which will henceforth be known as St. Patrick’s, Bunbury.

Archdeacon Smyth’s Wonderful Work
What was undoubtedly the culmination of a great endeavour in Church work was witnessed last Sunday by the people of the antique and pretty seaside town of Bunbury, when his Grace Archbishop Clune blessed and opened the beautiful and commodious church which will henceforth be known as St. Patrick’s, Bunbury. It is unquestionably a wonderful work worthy of the best days of Faith, alike glorious to the fidelity of the community who raised it, and a remarkable memorial to the foresight, zeal and courageous optimism and faith of the priestly genius that planned it and gave it completed form. For generations to come it will last an abiding memory of the energy and zeal of Archdeacon Smyth’s pastorate, and it will be positive evidence of the spiritual triumph of Catholicity in the South-West and its material progress. Raised up in its splendour on a hill overlooking the town, it is a veritable giant among the churches of the other denominations, and is easily the most striking landmark noticeable for miles and miles around, and may be easily seen by the mariner far out at sea. On the run down from Perth there is no occasion to ask where is St. Patrick’s? Its substantial tower and its well defined cross-crowned gables, its great brown roof, answers the question. St. Patrick’s looks down upon the quiet old seaside town like a benign friend, and when in years to come Bunbury has come into its own, and is recognised as one of the great water places of this State, it will stand erect and splendid upon its hill an evidence of Catholic faith in the stability of the South-West. Not only then is it a great reminder of spiritual progress achieved through the wonderful Gospel of Christ, but it also enunciates the importance of a courageous reliance on the future material values of the district. It is a sufficient answer to those indiscreet and anonymous critics who occasionally fling their brick-bats at Catholics and charge them with being enemies of the state, because it represents in hard cash, the contributions of a by no means wealthy community, the loyalty and fidelity of Catholic citizenship. “Money talks” is a much-used sporting phrase, which is well worth remembering by the self-appointed critics of the Catholic Church. The thousands spent in the erection of the stately God’s House dedicated by the Archbishop at Bunbury last Sunday, under the patronage of St. Patrick, the patron Saint of the Irish race, to the worship of the Almighty, should give a good solar-plexus blow to any local antagonism that might be prevalent in the neighbourhood against Catholics. There is not a little, we understand. It is mostly the outcome of jealousy and pique, and an insufficiency of human wisdom and knowledge. All the local churches, however, bear Saints’ names, and the Cathedral aspect and importance of St. Patrick’s, we have no doubt, will in time convert the malcontents to a better understanding of the virtues of the Catholic Church and its great Christian Charity.

The vast congregation filled to the doors every inch of space in the great building; the aisles were even crowded; the event was indeed a memorable and historic one. It will be a tradition for the Catholic people of the parish who witnessed to hand down to the next generation, and will be remembered with pride, when, at a later day, in the providence of God, St. Patrick’s will be raised to the dignity of an Episcopal Church. People came from Waterloo, Dardanup, Ferguson, Brunswick and Australind. Every portion of the vast district was represented. In the large congregation many representative non-Catholics were present to show their testimony of goodwill to the Catholic community and to its well-loved leader in the person of Archbishop Clune. Amongst the congregation were Messrs. Money, M.L.A. (representative of the district), and Rose, M.L.C., and many of the municipal councillors.

Prior to the opening ceremony, and early Mass was celebrated in the new church, and a large number approached the Holy Table. Up to a late hour on Sunday night Archdeacon Smyth, and Father Dunne, of the Cathedral staff, were busy in the confessionals. A large number of candidates for Confirmation were among the Communicants, and the first Mass was an inspiring example of Catholic Faith in the Real Presence, and assuredly consoling to his Grace and Archdeacon Smyth.

At half-past ten o’clock, punctually, his Grace, in cope and mitre and pastoral staff, preceded by acolytes and cross bearer, attended by Fathers Dunne, B.A., and W. Lyons (Dardanup), with Archdeacon Smyth as Master of Ceremonies, began the official blessing and opening ceremony. The Hibernians formed a guard of honour to his Grace, and a strong representation of the Children of Mary and members of the Sacred Heart Sodality joined in the procession around the church. The music of the grand old hymns, “Faith of Our Fathers,” “Nearer My God to Thee,” and “Hail Holy Patrick,” were well rendered by the parish brass band, and a great choir of voices made the strains ring out with great fervour-the effect was devotional and very beautiful.

The ceremony of blessing and dedication having been completed a Missa cantata was celebrated by Father J. Dunne, B.A.

After the Gospel, from the pulpit, Archdeacon Smyth, by way of introduction and explanation, said he was exceedingly gratified with all that had happened that day. The weather was superb, thank God. The dedication ceremony so much yearned for was as solemn as the rubrics allowed-and that was much. The full audience crowding the great edifice in every part and outside was a record and he felt sure that hundreds of the audience thrilled with the highest emotions of gladness, gratitude, and perhaps complacency. He welcomed them all-no matter what their religious susceptibilities-for the True Church encircled the world, and that material miniature in…(line missing from original)…grandeur of space and grace which was such a striking feature of God’s Kingdom on earth.

Many would like to know how they, a very poor community, managed to collect so much money and raise up such costly and imposing structures to the glory of God. Sincere faith in our God-created Church and its Divine Mission and generously-minded hearts and hands give the answer. A few years ago we began at scratch-no land, no credit, and not much hope! Yet within a few fleeting years we have spent almost £20,000 in buying, clearing, levelling and building, and today we owe a very big sum, almost as much as the City Council owes-and yet we fear it not-we owe about £5,000. But we have something to show for it. Everybody admires our picturesque site, and our glorious buildings are, or ought to be, the glory and pride of our people throughout the whole immense domain of the South-West. But all this work was not done without trouble. There were worries, risks, and disappointments. At times I had to battle through a hurricane of unjust and criminal criticism. But destructive criticism is a criterion of success, and I mention it not by way of complaint, but in order to emphasise my deep gratitude and appreciation of the many who loyally and valiantly stood by me in the various and trying vicissitudes of war and peace, and helped me to the consummation of today, and my last words are words of welcome in my own behalf and yours to our Archbishop. It would be easy to write an address of welcome and to frame it in the fantastic hyperbole so characteristic of the age, but when I tell him in this House of God that our welcome is warm and rich, he will feel himself welcomed and honoured on this special occasion in our midst today. He cannot but feel pleased to see this temple raised to the glory of God, and be happy in dedicating it for all time as God’s dwelling place.

Archdeacon Smyth read a long list of contributions received. At the close a collection was taken up, and the response was very generous.

The appointments of the church are in keeping with the beauty of St. Patrick’s. The Stations of the Cross, the gift of Mr. and the late Mrs. J. A. Boor, are artistically wrought representations of the Way of Sorrow to Calvary. They are in high relief, and cost 100 guineas.

At 4 o’clock in the afternoon, his Grace administered the Sacrament of Confirmation to a large number of candidates, amongst them being several adults. The church was thronged. Prior to the ceremony Archdeacon Smyth explained to the candidates the importance and necessity of the great Sacrament to be conferred, and the reasons why it was incumbent on the candidate to be well instructed in the truths of religion before the reception of the Sacrament, that they may be worthy of the supernatural dignity which it conferred.

His Grace was attended by Father Dunne, M.A., and Father W. Lyons. During the ceremony the choir beautifully…(line missing from original)…make their profession of Faith were told by his Grace its meaning-that it was a repetition of the profession made by their sponsors at baptism, and that they having come to the age of reason, would now make it for themselves in a public manner. As Catholics they would openly and unreservedly practice the principles of their Holy Faith. The grace received in Confirmation would help them to fight against the temptations they would experience when they went into the world. The candidates with great fervour recited the Lord’s Prayer, the Hail Mary, and the Apostles Creed. The usual promise to abstain from intoxicating liquors until the age of 21 was made. His Grace referred to the pie-bald prohibition that is at present being attempted in order to put down intemperance. Some people would be beggared at the expense of others. It would be ineffectual to achieve its object. The Catholic Church was doing more than any other body to combat the evil of intemperance, and was doing its work effectively and without noise. He was very pleased with this large number of candidates presented, and he again congratulated the Archdeacon on having accomplished in a short time what no other priest could have done. His Grace then imparted the Papal Blessing.

Benediction of the Blessed Sacrament followed, and at its conclusion the huge gathering rose, and led by the choir spiritedly sang “Faith of Our Fathers.”

So ended a most interesting day’s history in the life of Bunbury. 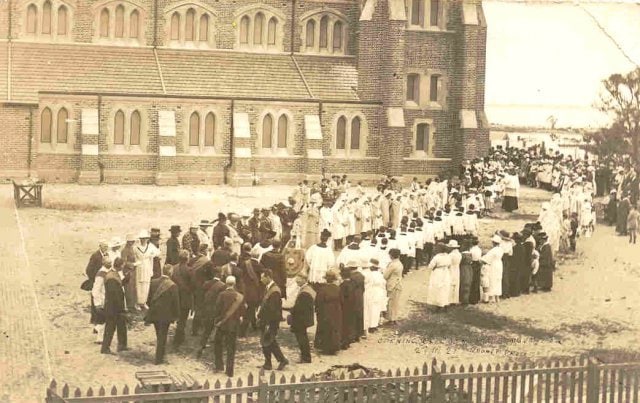 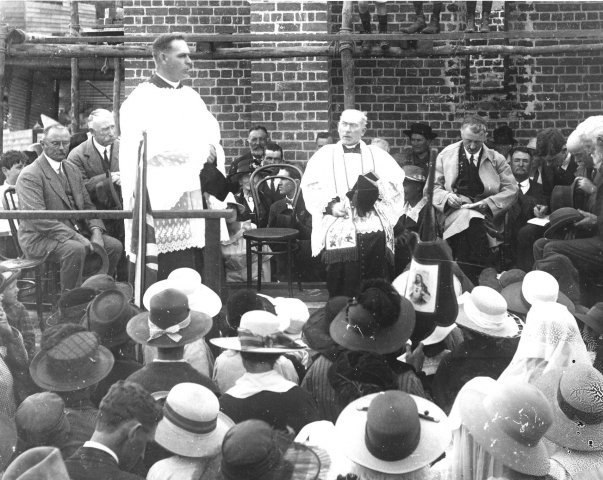 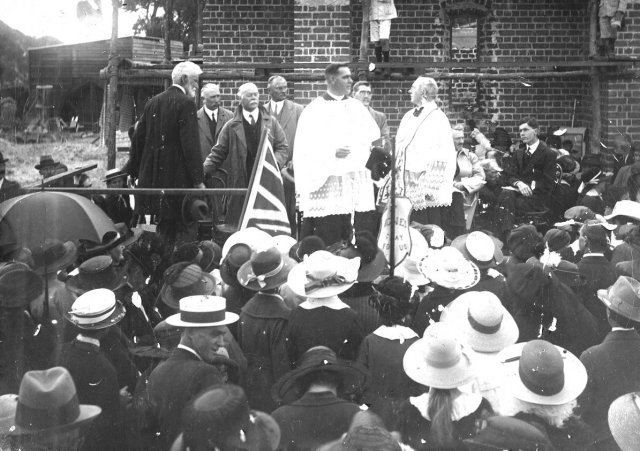 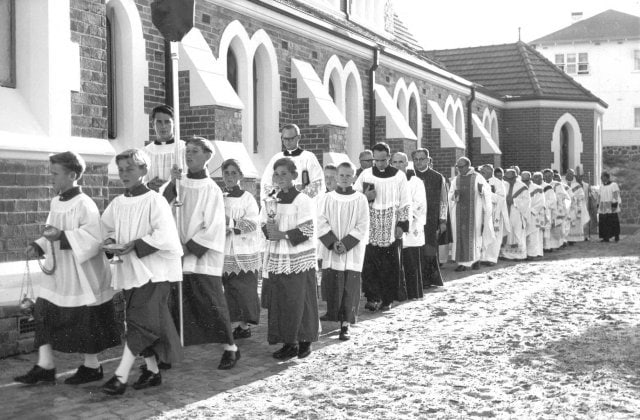 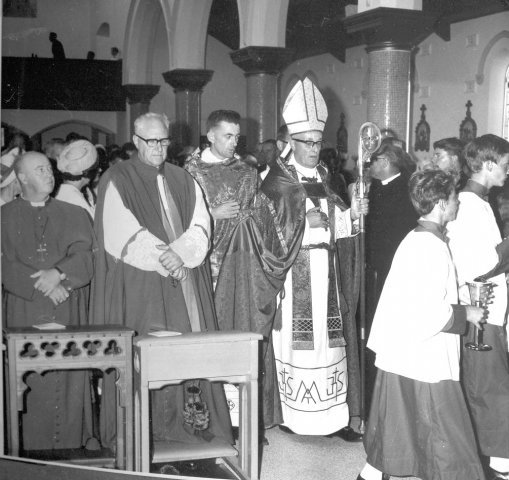 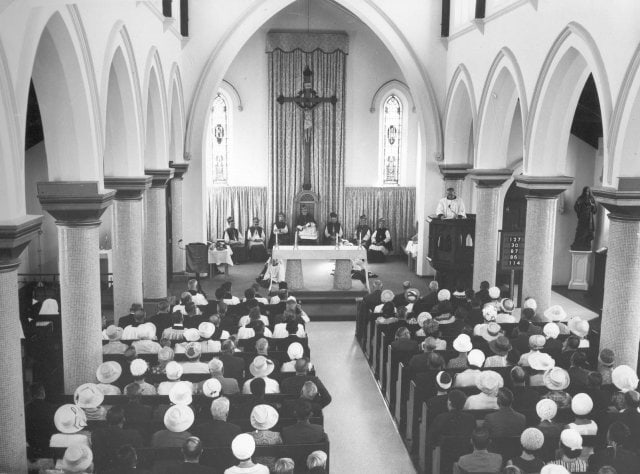 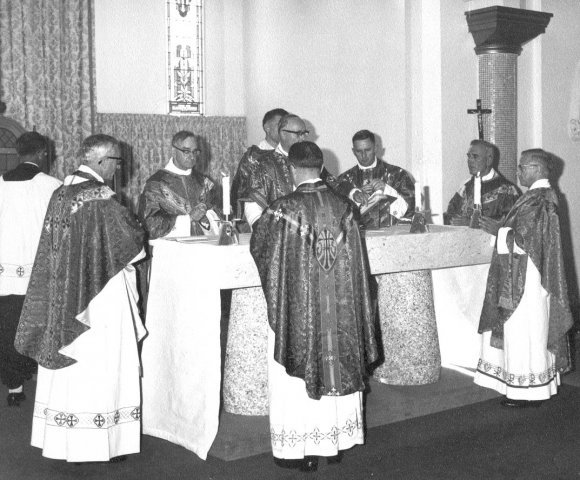 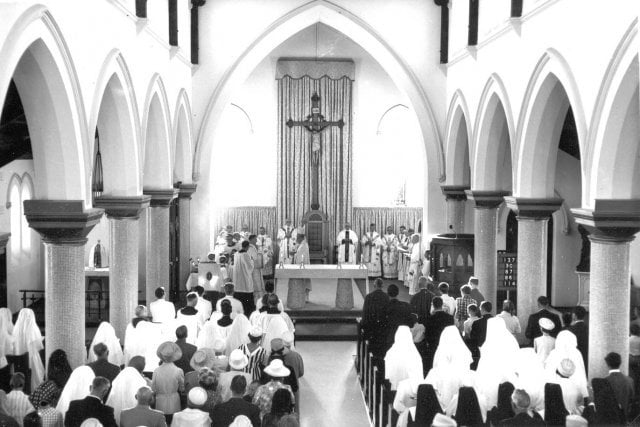 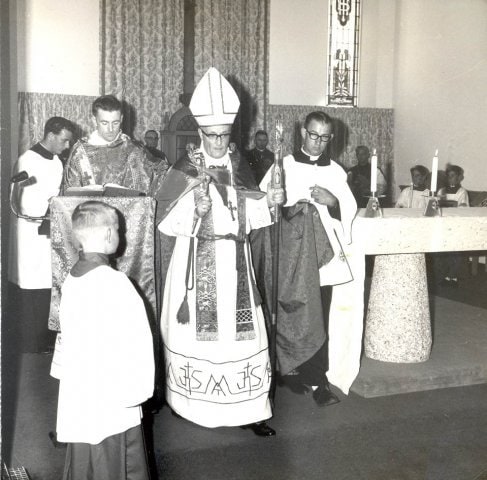