An interview with Fr Jess 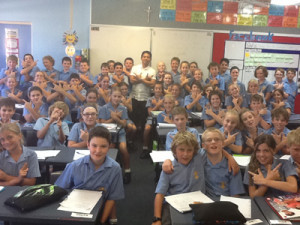 Has achieved his dream job because he has always wanted to be a priest from grade two.
Likes AFL and his favourite team is the Eagles. Which of course means his favourite colours are yellow and blue.
Is from the Philippines.
Has a few favourite Holy celebrations which are Christmas, Easter and April 28th , because that was when he became a priest.
Likes soccer. His teams are Spain in the World Cup and Manchester United in the Premier League.
Played basketball and football when he was younger.
Loved English, Woodwork and History when he was in school.
Loves eating bananas.
Always remembers the time when he was in the scouts as a young child and went camping and learnt how to use a compass.
Likes to eat chicken, rice and rice cakes.
Celebrates his birthday on the 12th of October.
Had a dog and a talking bird named Rooney (after Manchester United player Wayne Rooney.
Worked on a fishing boat and taught in a college before becoming a priest.

Feels like he is continuing the work of Jesus when he is giving a Sacrament.
Remembers fondly the Seminary as his favourite school in 1980 where he became a priest.
Has 4 brothers and 3 sisters! Who all grew up in a place called Kotabato-Philippines.
Has been a priest since April 28th 1994.
Likes the sports: badminton, fishing, tennis and basketball.
Was born in the district hospital in Tacurong in the Philippines.
Has a mother who was a teacher and a father who was a lawyer.
Thinks that The Prodical Son is the best story in the bible.
Has been told by many people that he has a good singing voice.
Has worked with Ms MacKenzie in 2001-2002 at St Joseph’s in Waroona. He is excited to be working with her again.
Likes to eat out at China City and Aristos in Bunbury….but he doesn’t really like fast food as he likes to eat healthily.
Has the nickname Papo because he has been likened to Ghandi whose nickname was also Papo, which means wisdom.
Studied in Belgium in 2004.
Has a lucky number which is 12 as this is his birthdate.
Likes books by Agatha Christie and biblical and historical literature.
Has many favourite Saints; one of which is St Peter Chanel who was a Missionary in Fiji. His feast day falls on the day Father Jess became a priest.