As you enter the Cathedral, you are in what is called the Cloister. The cloister contains four leadlight windows that were salvaged from the original cathedral prior to its demolition. There are eleven of these windows in total, displayed throughout the Cathedral precinct. 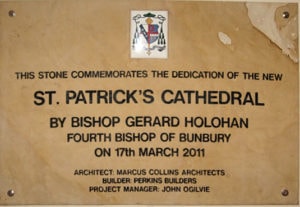 As you leave the cloister you will pass through the “Quinn Doors”, into what is known as the Narthex. These doors were also salvaged from the original cathedral. They were commissioned by Bishop Quinn to celebrate the Jubilee of the Bunbury Diocese, and are made from solid copper. Each door weighs over 100kgs. Inside the Narthex, are the foundation/dedication stones. The first stone is the foundation stone that was laid for St Patrick’s Church. Written in Latin it translates to:

The Venerable Archdeacon Smyth V.F was Parish Priest.” The second stone is the rededication stone for when St Patrick’s Church became a cathedral in 1954, following the establishment of the Bunbury Diocese. Prior to this, Bunbury was a parish in the Archdiocese of Perth. The third stone is the dedication stone of the current cathedral.

Upstairs is the Gallery which holds the organ, a Trillium 927 model three tier keyboard organ, made by Rodgers Instruments in the USA. The pews in the gallery were salvaged from the original cathedral and were restored by year ten students from Bunbury Catholic College in 2010.

As you pass through the glass doors, you enter the Baptistery. In the middle of the Baptistery is the large baptismal font. The font is located at the entry to the nave to symbolise the journey through the waters of baptism to the Altar. Inside the font sits the Paschal Candle. This candle is a large candle lit during the ceremony of the fire at the Easter Vigil. It is lit at every mass during the Easter season, and is also used at baptisms and funerals. This candle symbolises Christ as the light of the world, and his presence in the midst of his people. The floor tiles in the Baptistery have been laid in a cruciform or cross pattern. At either side of the Baptistery are the statues of St Anthony, the patron saint of the Italian community, and St Lorenzo, the patron saint of the Filipino community. The Baptistery also houses the sacred Oils used in the various sacraments. The oil of baptism, the oil of catechumens and the oil for the sick. There are two Confessionals, or Reconciliation rooms on either side of the Baptistery. They are situated between the Baptistery and the Altar to symbolise that once we have been Baptised, we must reconcile with Jesus in order to receive him in Communion at His altar. 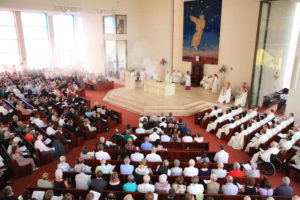 The Nave is the part of the cathedral where the congregation gathers for worship. The pews are all situated so that everyone’s attention is focussed on the Sanctuary.


Statues of Mary, Jesus and the Saints are found in Cathedrals and churches to inspire us to lead our Christian life as fully as possible. The statue of St Patrick used to stand in the entrance of the old cathedral. It was salvaged and restored, as was the statue of the Sacred Heart. The bronze bust of St Mary of the Cross (Mary MacKillop) was made using the same cast that made the bust given to Pope Benedict XVI by the Sisters of St Joseph when he visited Australia for World Youth Day in 2008. 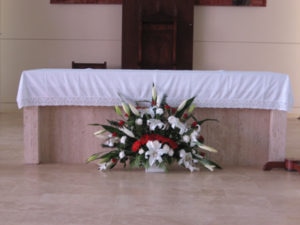 The Sanctuary is the front part of the church where the Mass is conducted. It is raised higher than the Nave to emphasise the importance of what happens there. The Altar and the Ambo are always situated on the Sanctuary. The Altar reminds believers that what is prepared here is a special meal modelled on what Jesus shared with the disciples. The Altar and Ambo were both donated by the Archdiocese of Perth and were originally housed in St Mary’s Cathedral. They match the Baptismal font which was also donated from St Mary’s Cathedral in Perth. The Altar is centrally located in the sanctuary to make sure it is the centre of attention. The Ambo, is sometimes called the lectern, and is the place from where the Word of God is read. The Word of God is always read from the Ambo to remind us that what we are hearing is important and requires special attention. 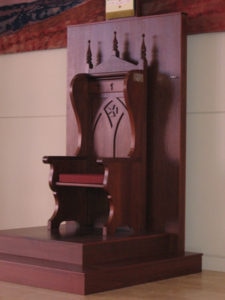 The Bishop’s chair, or Cathedra, is also situated on the sanctuary. It is a permanent fixture, but another chair is made available for priests or other ministers who celebrate in the cathedral. This Cathedra was salvaged from the old cathedral and restored. 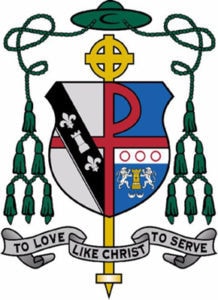 Above the Cathedra is the Bishop’s crest. A Bishop’s crest or Coat-of-Arms traditionally consists of two halves. The left half is the crest of the Diocese, the right, of the Bishop himself. Each Bishop’s crest is unique and has several distinct parts. Bishop Gerard Holohan’s crest is pictured and explained here:

The Christ-Symbol
The Arms of Bishop Holohan is dominated by an early Christian symbol of Christ. It is a stylized Greek Chi Rho in red, which symbolises Christ’s love. The rules of heraldry needed modification so that the Christ-symbol could dominate the Coat-of-Arms.

The Diocesan Shield
The Diocesan shield comprises a black bar on a silver background. The black represents Constancy, the silver represents peace and sincerity. The lily flower symbols on the bar represent Mary, the Mother of Christ, and the castle represents security.

The Holohan Shield
Bishop Holohan is the Sixth Bishop of that name. The previous Bishops served in Ross and Dromore-Ossory between 1157 and 1404. One became Archbishop of the Southern Half of Ireland between 1158 and 1182. The Holohan Crest is in the lower right half of the Coat-of-Arms, below the Christ-symbol. This reflects the new Bishop’s service of Christ. The crest is white on top, and blue beneath. The white portion of the shield, called the “Chief”, represents peace and serenity. The annulets (or rings) symbolises faithfulness, while the red in this context represents fortitude. The colour blue represents loyalty and truth. The tower represents greatness, the colour gold represents royalty, and the griffins on either side represent vigilance. The crescents below the tower represent ‘hope of greater glory’.

The Motto
The new Bishop’s motto, ‘To love, to serve like Christ’ replaces the traditional Holohan motto: ‘ They conquer who conquer themselves’ 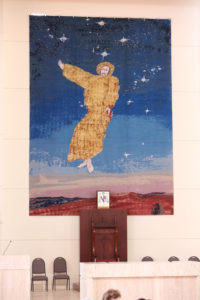 Above the Cathedra, is the Resurrection Tapestry. Based on a painting by Australian artist, Robert Juniper, the tapestry was hand woven in Nepal. The image of Jesus is woven from gold silk, and the tapestry weighs approximately 80kg. The Tapestry depicts Jesus rising from the tomb, which can be seen in the bottom right hand corner. The Resurrection Tapestry is a powerful reminder for us of Christ’s victory over death. 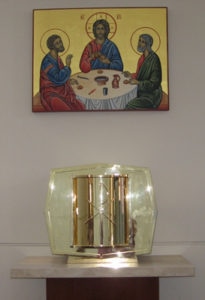 On the right side of the sanctuary is the Blessed Sacrament Chapel which houses the Tabernacle. The Tabernacle houses the consecrated hosts which are not needed during the Mass. The Sanctuary Lamp is the red light that signifies the presence of God in the Tabernacle that contains the Eucharist. The gold tabernacle and Sanctuary Lamp were salvaged from the old cathedral and restored. The icon that hangs above the Tabernacle is titled “Supper at Emmaus” and shows Jesus with St Luke and St Cleopas. It was painted by Marice Sariola of Dunsborough. In the floor at the front of the altar, is the opening that is used to lower coffins into the crypt below the cathedral. The Crypt has 16 vaults in it in which the bodies of Bishops will be laid to rest. Bishop Quinn is currently the only Bishop interred here, as of August 2011. 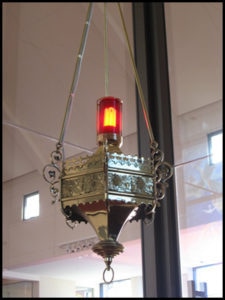 Alongside the Our Lady Chapel is the Sacristy. In here are kept all the sacred vessels and linens used during the mass. The Sacristan uses this room to prepare the Cathedral for mass. 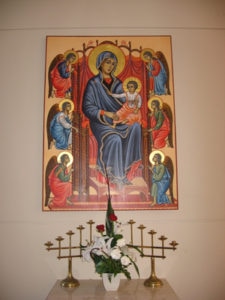 To the left of the Sanctuary, is Our Lady Chapel. The icon in this chapel was designed and painted especially for the cathedral. It is of Mary with the Christ Child, surrounded by angels, and was painted by Marice Sariola. The Mary Help of Christians Statue was taken from St Mary’s Church in South Bunbury when it was closed. Together they form a simple contemplativeness for this devotional space. 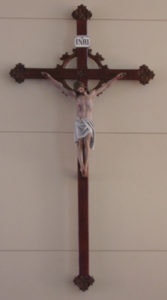 The crucifix makes present to us the sacrifice and death of Jesus on the cross. This crucifix was salvaged from the original cathedral and restored by the Art Department of Bunbury Catholic College in 2010. It hangs on the outer wall of the Blessed Sacrament Chapel. 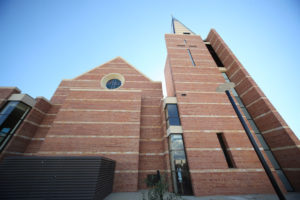 Above the Our Lady Chapel is the bell ringing platform, and above that is the bell tower. The single bell that can be seen through the window is from the old cathedral. This bell was cast in Dublin in 1885, and it sits on what was the baptismal font from the old cathedral. There are eight new bells that can be rung either by hand or electronically further up inside the bell tower.

The glass spire that sits on top of the Cathedral was inspired by cathedrals found throughout Europe. On special occasions such as Christmas and Easter, the whole spire is illuminated at night. Every night, the cruciform openings on the sides of the bell tower light up at dusk to remind people of the symbol of Christ’s presence among them.

Stations of the Cross

The stations of the cross depict the journey of Jesus to his death on the cross. Having them on display in the cathedral helps the faithful make a spiritual pilgrimage of prayer through meditating upon the chief scenes of Christ’s suffering. The Stations of the Cross were taken from St Mary’s Church in South Bunbury when it was closed, and are displayed on the walls on either side of the Baptistery. 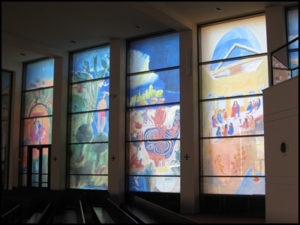 The 14 large windows along the North and South walls of the Cathedral depict scenes from the bible and were painted by Australian artist, Robert Juniper. The original paintings were photographed with a digital camera, enlarged and laminated between two sheets of glass. The process is called ‘digiglass’, and is named after the Melbourne company who invented it.

The 7 Northern windows are scenes from the old testament of the Bible, and the 7 Southern windows depict images from the new testament. The windows, starting in the North Western corner of the Cathedral.

The two small windows above the gallery and the sanctuary were also made from paintings by Robert Juniper. One is a painting of St Patrick, the patron saint of the Cathedral, the other depicts two dancing brolga’s and symbolises Trust in God.

You can read a detailed description of each of the windows here.